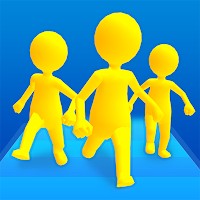 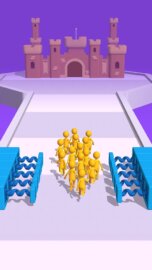 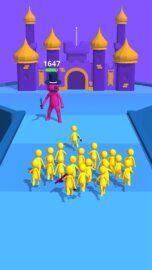 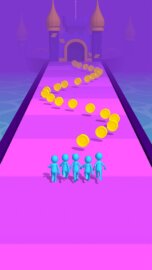 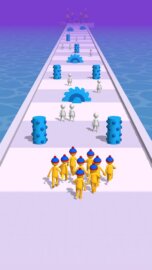 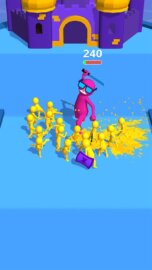 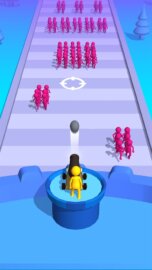 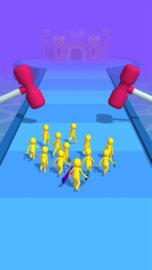 Join Clash is an exciting and unusual arcade game created by Supersonic Studios especially for lovers of simple and dynamic games. The user will have to control a squad of identical three-dimensional men and take part in massive battles. The main goal is to avoid treacherous traps, overcome all obstacles, capture the enemy’s castle and hold your own citadel. To win, you need to develop a unique win-win strategy of the battle, calculate your every step and anticipate the actions of your enemies.

In the game Join Clash for android, you first need to pick up a good team. The success of the campaign depends on the size of the squad and the ability to rationally use the available characters. Agile and strong fighters will easily carry out the most difficult and daring attack, defeat opponents and occupy their castle. But it is important to take into account the insidiousness and experience of opponents. If you throw all your forces into the assault, the other team will be able to capture the empty base practically without a fight. To prevent such an outcome, it will be necessary to leave numerous guards there before each sortie.

Join Clash has unpredictable gameplay. The participant will constantly face various troubles, solve complex problems. At the end of each level, an exciting final battle awaits him, in which it is not so easy to win. You should not rush headlong into the attack, you should take care of the team members. It is necessary to use cunning maneuvers, achieving goals with unusual methods. For example, wait out the most dangerous moments of the battle, and then unexpectedly attack an exhausted and exhausted enemy.

Join Clash arcade features bright graphics in a minimalist style. Users will love the unique game mechanics and realistic physics of movements. The game is well adapted to work on mobile devices. Even a small display reproduces the smallest details of battles. Simple controls can be mastered in minutes. The pumping system has been successfully implemented, which allows you to get a truly invincible team. The project develops logic, ingenuity and strategic thinking.

Features of the game Join Clash

You can download the game Join Clash for Android using the active link below.