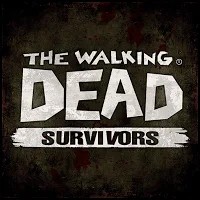 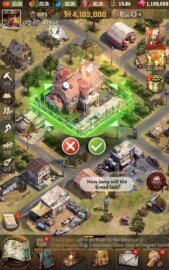 The Walking Dead: Survivors is a fun building strategy game developed by Elex. The game is based on the cult TV series The Walking Dead. The Survivors release has an exciting plot and takes the participant into the world where the zombie apocalypse took place. Crowds of starving monsters roam the city streets. A handful of survivors are forced to hide in forests and ravines. They dream of finding a safe haven where they can build a peaceful life and forget about the terrible events of the recent past.

In the game The Walking Dead: Survivors for android, people get on a bus and try to escape from the infected territory. But at some point, their transport breaks down. They are forced to fight the walking dead in the open. This is where the game begins. In order not to die in the first minutes, dexterity, good reaction and the ability to shoot are required. In the squad, the participant will see familiar characters, remembered from The Walking Dead. He will have to help the heroes repel the attack. The participant will face spectacular battles with real players through high-quality and functional multiplayer.

The Walking Dead: Survivors has interesting and consistent gameplay. First you need to explore the areas covered with dense fog and find a suitable location. There it is necessary to organize the extraction of resources and materials for construction. The members of the squad will have to hunt and fish to provide themselves with food. But the main thing is to get and constantly improve weapons in order to repel the attacking monsters. The participant needs to build a safe haven where people can live and work without fear for their lives. It is also important to build and strengthen defensive structures.

In The Walking Dead: Survivors, you sometimes have to make forays into zombie-controlled territory. This will allow you to replenish food and ammunition supplies, find new resources and other useful items. To survive, the player must correctly distribute everything that he can get. He must protect his people and repel the attacks of the living dead in time. This is the essence of the strategy. The player observes what is happening from above, which is typical for such projects. The strategy has beautiful hand-drawn graphics, well-chosen soundtrack, interesting dialogues. You can download the game The Walking Dead: Survivors for Android using the active link below.