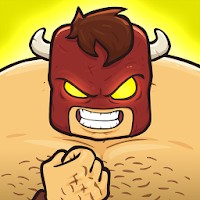 Burrito Bison: Launcha Libre is an addictive and dynamic arcade game developed by Kongregate. The game has a slightly naive, but fascinating plot, interesting gameplay, beautiful bright graphics, an intuitive interface and convenient controls. She takes the participant to a fairy-tale world where you can feel the Mexican flavor. He has to help the main character named Burrito Bison. He got into an unpleasant situation and now wants to take revenge on his offenders.

The main character in the game Burrito Bison: Launcha Libre for android is a Mexican fighter with a powerful body and a bull’s head who loves national cuisine. He writes down the recipes for his favorite dishes in a special booklet. But the evil gummy bears stole the diary. Now the hero will have to do without some kind of culinary masterpieces. But he is not discouraged and intends to punish the robbers. Together with his friends, he will have to invade their world and put things in order.

Burrito Bison: Launcha Libre has almost endless gameplay. To fight enemies, the character is going to use unusual techniques and unsurpassed techniques. In this respect, the arcade is reminiscent of the popular Angry Birds, where you had to launch angry birds using a huge slingshot. Here, for this purpose, the ropes are used, stretched along the borders of the ring. But the essence is the same: you need to knock down all opponents who will be on the other side of the display.

Opponents have unique abilities and can fight back the fighter. But each of them has weak points. The user’s task is to identify them, this will increase his chances of winning. In addition to the usual bears, the player will have to face a large boss standing on a separate site. It is important to inflict maximum damage on him. This will be helped by special bonuses that improve the characteristics of the fighter. They are able to make him stronger, dexterous and accurate, but only for a limited time. You also need to use techniques that allow you to instantly neutralize opponents.

The most important stage of the Burrito Bison gameplay is the store. There you can purchase additional upgrades and unlock new enemies. This will make the arcade game more dynamic and increase the difficulty. The pumped-over Burrito Bison can easily overcome hundreds of meters and destroy all enemies that it manages to turn up under the hot hand. For a successful passage, the player will need dexterity, accuracy, attentiveness, perseverance, the ability to calculate the trajectory of movement and, of course, luck.

Arcade Burrito Bison: Launcha Libre has a dynamic and unpredictable plot. The application is perfectly adapted to work on mobile devices. Cartoon images are well displayed on displays, the user can easily disassemble even the smallest details. Gamers will love the beautiful design of the locations and the detailed portrayal of the characters. As they progress, they will have to visit different places, explore beautiful cities and magnificent landscapes of the fairy world. Perfectly selected musical accompaniment creates the right atmosphere. The controls in the game are quite simple: you need to touch the screen and hold your finger until the maximum tension value is displayed on a special scale. Launcha Libre will appeal to all fans of original arcades and will help you to have a good time.

You can download the game Burrito Bison: Launcha Libre for Android using the active link below.