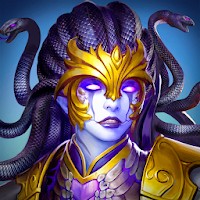 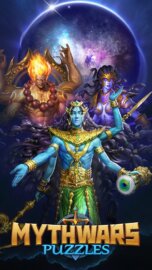 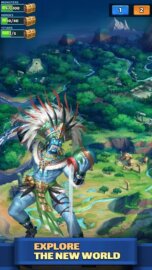 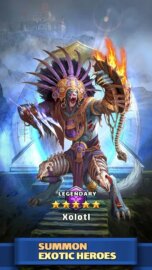 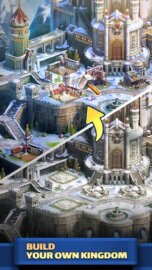 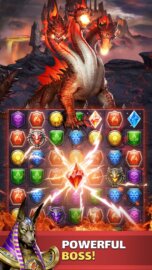 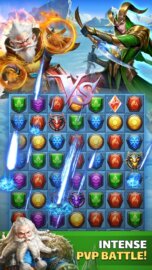 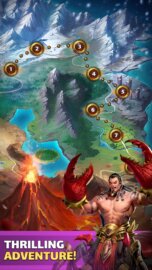 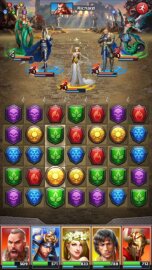 MythWars & Puzzles is an addictive RPG with match 3 puzzle elements. The game has a detailed backstory and a branched storyline that tells about the fates of different heroes. Events take place in a mystical world where different creatures and powerful gods live. A fierce war broke out between them. This led to the destruction of peaceful lands, where ordinary mortals used to live. The human world has turned into chaos, dark times have come. But there is a chance to restore it.

In the game MythWars & Puzzles for android, the gamer will play as a powerful lord, chosen to fight the cruel gods. It is he who will prepare a strong army, summon legendary heroes and challenge enemies. He will have to fight the arrogant and all-powerful celestials who have destroyed the human world. Also, evil monsters – the creatures of ancient darkness – will stand in his way. The game features dragons and other magical creatures. It will take a lot of effort to win.

Another part of the gameplay of MythWars & Puzzles is about building a beautiful magical city. The participant should organize the extraction of resources, the construction of a castle, economic and defensive structures. Throughout the game, you need to improve buildings and develop infrastructure. It is important that the population of the fortress flourishes. From time to time, the participant will have to collect troops and engage in battle with insidious and powerful creatures. This will allow you to gain additional experience, rise in the ranking and take a leading position in the list of the best players.

But the basis of the gameplay of MythWars & Puzzles is the solution of puzzles “three in a row”. By collecting combinations, the user gains additional skills and can strengthen his soldiers, which will more effectively attack opponents. When all the monsters are defeated at the location, the player goes to the next level. Additionally, the developers offer an interesting feature. The gamer can interrupt the game at any time and plunge into the study of the history of the mythical world. He learns where these or those characters came from, what caused the war of the gods, why there was a general devastation of the territories inhabited by people. You can download the game MythWars & Puzzles for Android using the active link below.