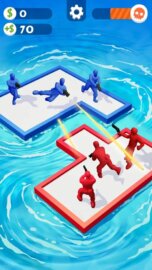 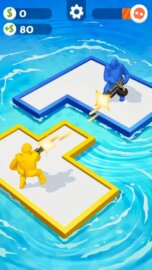 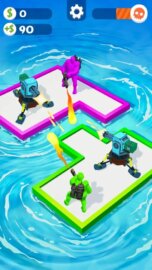 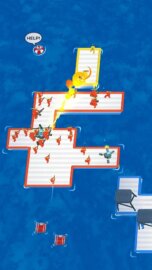 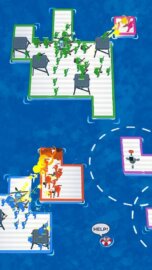 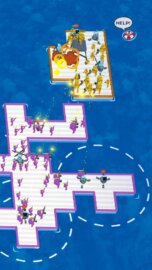 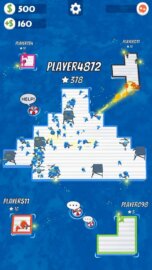 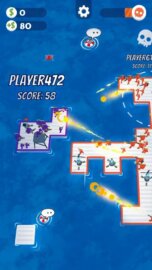 War of Rafts: Crazy Sea Battle is an interesting casual arcade game with strategy elements made in the IO genre. The events in the game take place on the high seas, where fate has thrown the player. He will have to explore the surroundings, fight with other participants in real time. The main goal is to create a powerful and protected floating base, expand it, gather a team of desperate and brave fighters, and capture enemy sea citadels. The project has an addicting and uncomplicated gameplay, beautiful bright graphics and easy controls.

In the game War of Rafts on android, at first, the participant will have only one small raft. At this stage, special care should be taken, because it can easily be captured by opponents. You need to sail the sea and collect rafts, expanding the territory of the base. It is also necessary to hire little people who will be included in the squad. Useful items also float in the sea. There you can find a powerful engine, defensive towers, treasures and other things that may come in handy.

As you progress through War of Rafts, the gamer will be able to upgrade the raft, expand the crew and enter into confrontation with enemy ships. Each victory won strengthens the player’s base and opens up additional opportunities for him. Participants will love the simple but bright and high quality graphics. The lightweight app works fine even on weak devices. It is perfectly adapted and does not freeze. Epic multiplayer battles and exciting adventures will impress fans of such arcades.

Features of the game War of Rafts

You can download the game War of Rafts: Crazy Sea Battle for android using the active link below.